When God Changes His Mind 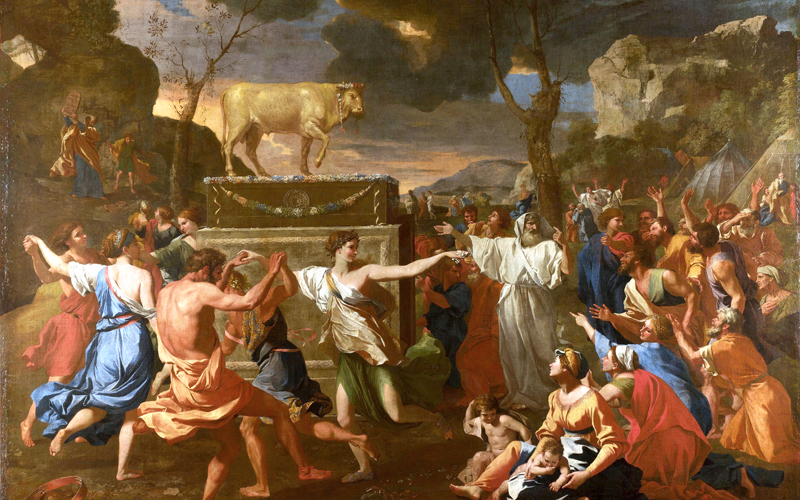 [7] The LORD said to Moses, “Go down at once! Your people, whom you brought up out of the land of Egypt, have acted perversely; [8] they have been quick to turn aside from the way that I commanded them; they have cast for themselves an image of a calf, and have worshiped it and sacrificed to it, and said, ‘These are your gods, O Israel, who brought you up out of the land of Egypt!’” [9] The LORD said to Moses, “I have seen this people, how stiff-necked they are.

[11] But Moses implored the LORD his God, and said, “O LORD, why does your wrath burn hot against your people, whom you brought out of the land of Egypt with great power and with a mighty hand? [12] Why should the Egyptians say, ‘It was with evil intent that he brought them out to kill them in the mountains, and to consume them from the face of the earth’? Turn from your fierce wrath; change your mind and do not bring disaster on your people. [13] Remember Abraham, Isaac, and Israel, your servants, how you swore to them by your own self, saying to them, ‘I will multiply your descendants like the stars of heaven, and all this land that I have promised I will give to your descendants, and they shall inherit it forever.’” [14] And the LORD changed his mind about the disaster that he planned to bring on his people.

God walks with us relationally. His essential character never changes – he is always good, loving, and holy – but he moves through time right alongside us as our story unfolds.

The Lord is relational; he interacts with his people. Moses didn’t tell God anything he didn’t already know. Instead Moses appealed to God based on what he knew about the glory of his name and his faithfulness to his promises. This suggsts that when we relate to an aspect of God’s character, he is free to change with regard to his actions without changing at all in character. That is, he is free to make a change in how he will interact with his people. God’s relenting from destroying Israel didn’t imply that he’d changed his attitude toward their sin. In fact, though he didn’t obliterate them, he did hold them accountable for their wickedness (32:27-28, 33-35). God thus hupheld his reputation, remained faithful to his Word, and displayed his grace.

The first phrase in Tony’s observation is what sticks with me. “The Lord is relational.”

In order for God to truly be love, he must be relational. He involves himself in the affairs of his creation rather than remaining aloof and distant. He does this to the point of coming, himself, into the middle of our human predicament and suffering at the hands of a corrupt state, offering himself as the sacrifice needed to reconcile an alienated human race back into intimate fellowship with himself.

And he must also be just in his punishment toward sin because real love refuses to leave its objects in misery and ruin. So he judges that which threatens the relationship between himself and the people whom he loves while never ceasing to be good and benevolent.

Know that God loves you. He sees your sin and your tendency to “quickly turn aside,” and yet he is unrelenting in his loving pursuit of you, willing to involve himself in all that holds you back from a full, intimate relationship with himself. So approach him in prayer, asking for forgiveness, trusting his grace, knowing that he longs to receive you.

About the Cover Art: Poussin, Nicolas, 1594?-1665. Adoration of the Golden Calf, from Art in the Christian Tradition, a project of the Vanderbilt Divinity Library, Nashville, TN.