A Warning for the Rich, A Promise for the Poor 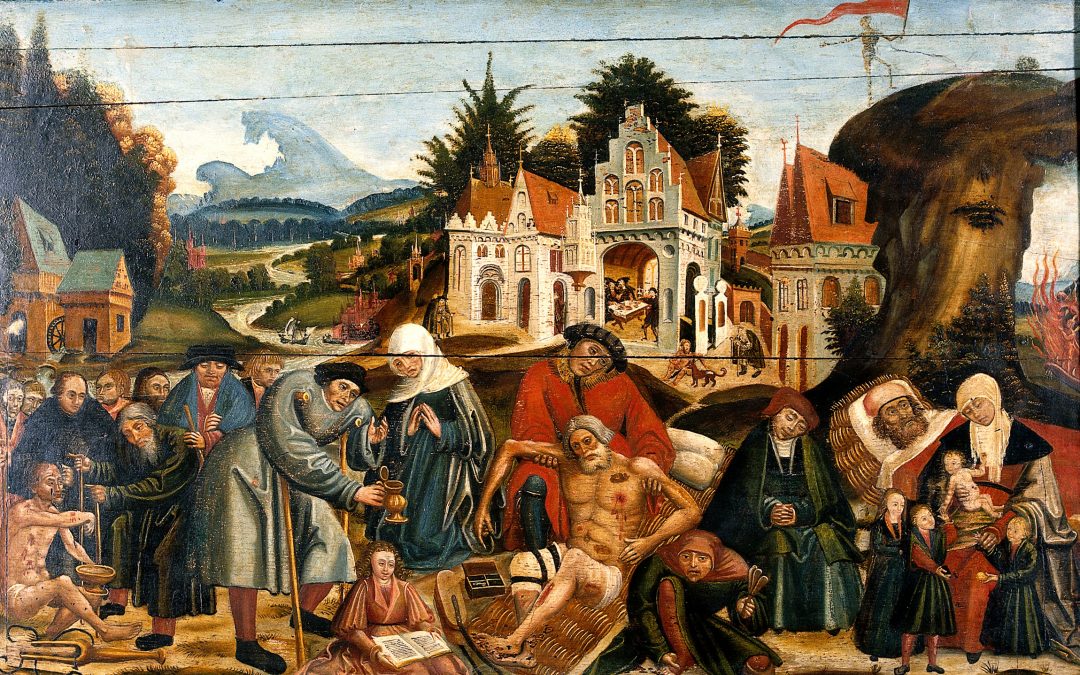 [19] “There was a rich man who was dressed in purple and fine linen and who feasted sumptuously every day. [20] And at his gate lay a poor man named Lazarus, covered with sores, [21] who longed to satisfy his hunger with what fell from the rich man’s table; even the dogs would come and lick his sores. [22] The poor man died and was carried away by the angels to be with Abraham. The rich man also died and was buried. [23] In Hades, where he was being tormented, he looked up and saw Abraham far away with Lazarus by his side. [24] He called out, ‘Father Abraham, have mercy on me, and send Lazarus to dip the tip of his finger in water and cool my tongue; for I am in agony in these flames.’ [25] But Abraham said, ‘Child, remember that during your lifetime you received your good things, and Lazarus in like manner evil things; but now he is comforted here, and you are in agony. [26] Besides all this, between you and us a great chasm has been fixed, so that those who might want to pass from here to you cannot do so, and no one can cross from there to us.’ [27] He said, ‘Then, father, I beg you to send him to my father’s house— [28] for I have five brothers—that he may warn them, so that they will not also come into this place of torment.’ [29] Abraham replied, ‘They have Moses and the prophets; they should listen to them.’ [30] He said, ‘No, father Abraham; but if someone goes to them from the dead, they will repent.’ [31] He said to him, ‘If they do not listen to Moses and the prophets, neither will they be convinced even if someone rises from the dead.’”

God will flip the script on behalf of the poor for eternity and he invites all of us to be part of that process now, during this life. He offers judgment to those who are rich and ignore the poor, which puts vital questions before each of us. Will we see? Will we care? Will we act?

I have a sense of embarrassment when I look back at notes I wrote (and preached) about this story a couple of decades ago. I made the common mistake of interpreting the story through the lens of a modern, western, evangelical perspective. I assumed the passage was about death and the afterlife, heaven (or paradise) and hell (or hades), and how the evangelical plan of salvation alone would make the difference between these two fates.

It makes for persuasive preaching to put the emphasis on what it looks like to be permanently locked into suffering and torment in the afterlife after having ignored the scriptures during this life. But is that really the point of the story? I don’t think so anymore.

Jesus was really sharing a drama with us in which the script is flipped as the story unfolds.

The rich man – who was very, very rich and enjoyed a life of ease, comfort, extravagance, and luxury – had all of his needs met. He was safe. He was served. He was significant.

The poor man, Lazarus – who endured a life of suffering – had needs that perpetually went unmet. He was ignored, overlooked, and devalued.

Both men are children of Abraham. Both men die. And both men have lives that continue beyond the veil of death.

In the final equation, the rich man winds up poor and the poor man winds up rich. He who had been so secure in his wealth is suffering after death while he one who could find no refuge or relief discovers peace and bliss.

This is God’s Kingdom, where everything that is corrupt about the world which we have created is turned upside down. In God’s Kingdom, the poor are elevated and God himself acts with compassion on behalf of everyone who has had to live on the margins.

The story isn’t about a modern version of the gospel, or evangelism, or heaven or hell. The story appears in a larger context of Jesus’ teachings about the fact that you cannot love God (and by extension, love the people whom God loves) while at the same time loving money (and by extension, the corrupt sources from which it flows so freely to some and so sparingly to others).

So the questions put before us aren’t about where we’re going when we die or if we have believed the right doctrines or not. The questions are more practical:

Or will you and I, like the rich man who knew exactly who Lazarus was, turn a blind eye and continue to enjoy life’s luxuries without regard to those who are suffering?

About the Cover Art: Works of Mercy with Dives and Lazarus, from Art in the Christian Tradition, a project of the Vanderbilt Divinity Library, Nashville, TN.