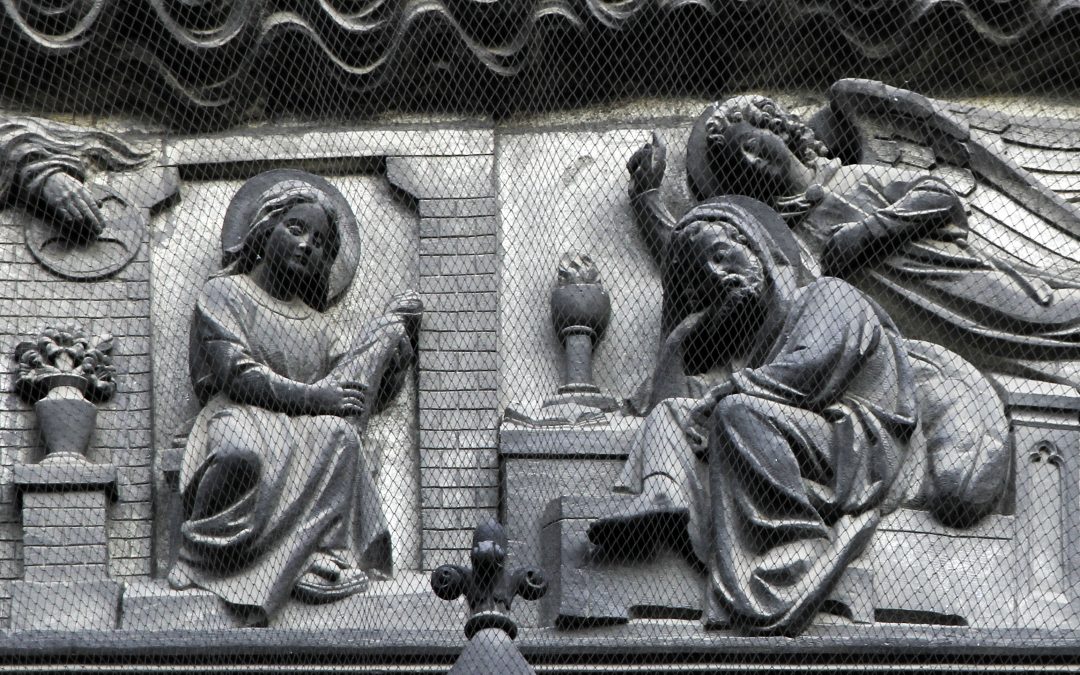 [18] Now the birth of Jesus the Messiah took place in this way. When his mother Mary had been engaged to Joseph, but before they lived together, she was found to be with child from the Holy Spirit. [19] Her husband Joseph, being a righteous man and unwilling to expose her to public disgrace, planned to dismiss her quietly. [20] But just when he had resolved to do this, an angel of the Lord appeared to him in a dream and said, “Joseph, son of David, do not be afraid to take Mary as your wife, for the child conceived in her is from the Holy Spirit. [21] She will bear a son, and you are to name him Jesus, for he will save his people from their sins.”

[22] All this took place to fulfill what had been spoken by the Lord through the prophet: [23] “Look, the virgin shall conceive and bear a son, and they shall name him Emmanuel,” which means, “God is with us.” [24] When Joseph awoke from sleep, he did as the angel of the Lord commanded him; he took her as his wife, [25] but had no marital relations with her until she had borne a son; and he named him Jesus.

There is no event more significant than the moment you personally encounter God in Christ. That moment changes everything, forever. If you allow it, the moment you meet Jesus can change the way you think about absolutely everything and alter the trajectory of every relationship you enjoy.

Information about the text that matters to the message, a potential outline, key truths to share, etc.

Joseph is an interesting Bible character for the simple reason that he plays a very significant role in the life of Jesus, but then he passes off the scene and is not mentioned beyond Jesus’ boyhood (Luke 2). Tradition has it that Joseph died before Jesus began His earthly ministry.

Joseph was a very good man, as can be seen from the story at hand. He had more than likely been brought up learning the traditions of Israel and believed in a coming Messiah. He had heard the prophecies before.

A lot of us are very much like Joseph. We’ve heard about religion all our lives but may not have personally experienced meeting God. But God wants you to experience him.

The message God gave to Joseph is an invitation for all of us.

Message #1: God is at work in your life.

I don’t believe for a second that Joseph and Mary became the earthly parents of Jesus by accident. They were chosen for this task. We are not given insight into exactly why God chose them but we know that God had selected them, or why he had so arranged the timing of their lives (and of the world for that matter) such that Jesus would come at the perfect time and to the perfect place.

God has been at work in your life as well. He knew you before you were ever thought about by your parents. He so arranged things today that you could be here in this place, hearing the gospel with an opportunity to meet the Savior.

God is always at work in, around, and through us. We can either sleep through His activity or respond to what he is doing. I hope you’ll want to be involved with what God is doing today.

Message #2: God is providing you with a Savior.

God chose to reveal more to Joseph than the simple fact that his betrothed bride was pregnant. He also showed Joseph that her child would be God incarnate. He would be the son “of the Holy Spirit” and would be “God with us.”

Jesus possessed all of the qualities of a human being physically, emotionally, and intellectually and knows how to be human, just as we are.

Jesus also shared every divine attribute with God. He never ceased to possess these qualities, but temporarily limited His ability to access them. He never ceases to be God.

As the Apostle Paul reminds us…

[5] Let the same mind be in you that was in Christ Jesus, [6] who, though he was in the form of God, did not regard equality with God as something to be exploited, [7] but emptied himself, taking the form of a slave, being born in human likeness. And being found in human form, [8] he humbled himself and became obedient to the point of death— even death on a cross.

Message #3: God is inviting you to respond to his gift.

Joseph had a choice in the matter. God had given him clear instructions to go ahead and marry Mary, but Joseph had to decide to obey.

Imagine all that Joseph would have missed had he said “no.” What happens if you say “no?” God has given you this opportunity and has ordered your life to bring you to a moment of decision about Christ, but what if you say “no?”

It’s possible that you’ve become addicted to a safe, comfortable, routine life. But God wants you to personally experience a relationship with him. Why not open yourself up today to hear what he has to say to you?

About the Cover Art: Joseph’s Dream, from Art in the Christian Tradition, a project of the Vanderbilt Divinity Library, Nashville, TN.