The Kingdom of God is Near 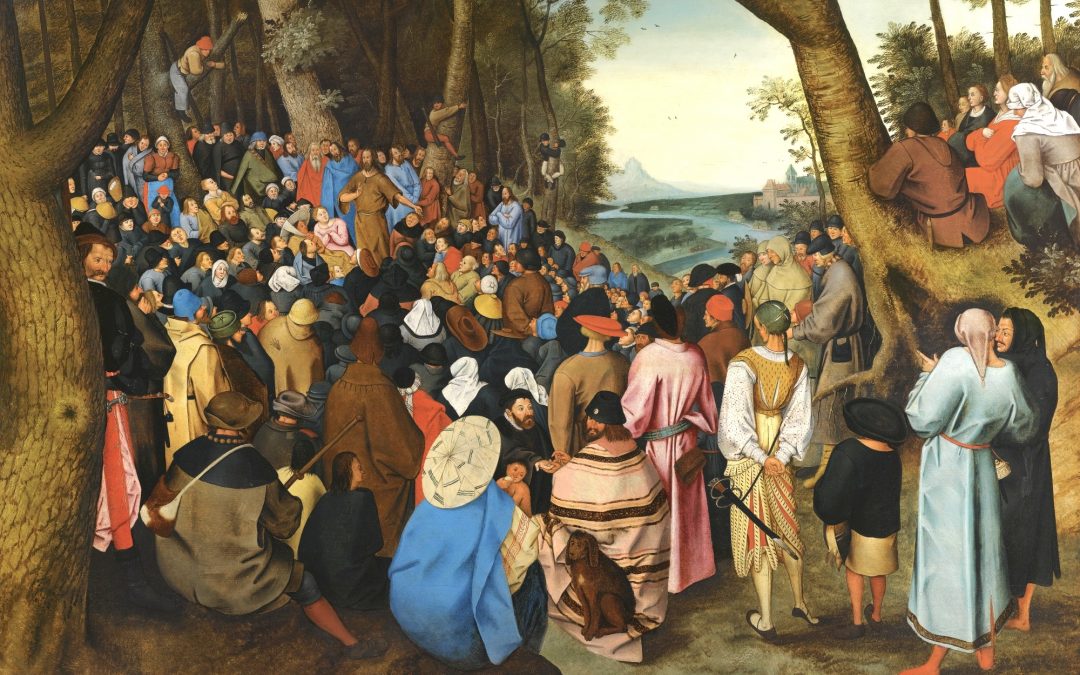 [1] In those days John the Baptist appeared in the wilderness of Judea, proclaiming, [2] “Repent, for the kingdom of heaven has come near.” [3] This is the one of whom the prophet Isaiah spoke when he said,“The voice of one crying out in the wilderness: ‘Prepare the way of the Lord, make his paths straight.’”

[4] Now John wore clothing of camel’s hair with a leather belt around his waist, and his food was locusts and wild honey. [5] Then the people of Jerusalem and all Judea were going out to him, and all the region along the Jordan, [6] and they were baptized by him in the river Jordan, confessing their sins.

[7] But when he saw many Pharisees and Sadducees coming for baptism, he said to them, “You brood of vipers! Who warned you to flee from the wrath to come? [8] Bear fruit worthy of repentance. [9] Do not presume to say to yourselves, ‘We have Abraham as our ancestor’; for I tell you, God is able from these stones to raise up children to Abraham. [10] Even now the ax is lying at the root of the trees; every tree therefore that does not bear good fruit is cut down and thrown into the fire.

[11] “I baptize you with water for repentance, but one who is more powerful than I is coming after me; I am not worthy to carry his sandals. He will baptize you with the Holy Spirit and fire. [12] His winnowing fork is in his hand, and he will clear his threshing floor and will gather his wheat into the granary; but the chaff he will burn with unquenchable fire.”

The gospel changes everything! Jesus’ good news that the kingdom of God is near is the most radical, world-changing message ever revealed by God, and the best response we can give is to repent – to embrace the complete change of mind, heart, and soul that entering and understanding God’s kingdom requires.

Information about the text that matters to the message, a potential outline, key truths to share, etc.

Yet they both came presenting one unified message – that the kingdom of God was/is “near” or “at hand,” depending on your translation choice. And we’ve all been a little confused since.

There are a lot of different interpretations of what it meant for either John or Jesus to claim that “the kingdom is near.” I remember growing up believing that this must have to do with the second coming of Christ, the rapture, etc., but I think we often overcomplicate passages like this one. We turn the “kingdom of God” into a purely apocalyptic reality.

One of the reasons I believe we do this is because we import into the text our western, imperialistic idea of what a kingdom is.

Yes, it’s true that the Kingdom of God is the realm over which Jesus Christ has been enthroned as King, but his kingdom is not in competition with other kingdoms, the way kingdoms always have been in human history. Rather, God’s kingdom is interwoven with all of life and creation as we know it.

Granted, some people can see, perceive, and understand God’s kingdom while others are blind to its reality, but God’s kingdom is spiritual rather than geographical and it’s all about redemption and restoration rather than dominance.

Jesus lived out the values of God’s kingdom and taught those values to others while freely inviting all who were willing to have opened eyes and ears to see and to understand the entirely new kind of existence possible for us within the kingdom realm.

Everything about God’s kingdom is upside down in comparison with the kingdoms we’ve known. Rather than committing violent acts to secure his kingdom, Jesus absorbed the violence of humanity. Rather than establishing superiority with a robust military presence, Jesus calls his followers to become servants to everyone else around us who may have a need.

And to “enter” into this kingdom – that is, to perceive its existence, understand what it’s about, and live within its parameters – we must embrace a completely different way of thinking. We must allow our values to be flipped upside down and re-think everything we thought we knew about God, ourselves, and our world.

This kind of radical change in thinking in which all of our worldly values are flipped on their heads has a name.

And that’s why John and Jesus both declared boldly that “the Kingdom of God is near, right here, all around you, and freely available” and the proper response to such good news and the only way to say Yes to God’s invitation into this new kingdom is to repent.

Here’s the question that matters for those who haven’t heard or understood the good news about God’s kingdom yet: How has your way of thinking been working for you?

And when you’re ready to embrace a whole new life, enter a redeemed community, and engage the world with an entirely new mindset, the doors to the kingdom of God remain open for you!

The proper response to the message of God’s Kingdom is repentance, which means completely changing the way we think.

About the Cover Art: Bruegel, Pieter, 1564-1638. Saint John the Baptist Preaching to the Masses in the Wilderness, from Art in the Christian Tradition, a project of the Vanderbilt Divinity Library, Nashville, TN.